“If gender be defined as the culturally establishes correlates of sex (whether in consequence of biology or learning), then gender display refers to conventionalized portrayals of these correlates.”1

“The divisions and hierarchies of social structure are depicted microecologically, that is, through the use of small-scale spatial metaphors. Mystic historic events are played through in a condensed and idealized version. Apparent junctures or turning points in life are solemnized, as in christenings, graduation exercises, marriage ceremonies, and funerals. Social relationships are addressed by greetings and farewells. Seasonal cycles are given dramatized boundaries. Reunions are held. Annual vacations and, on a lesser scale, outings on weekends are assayed, bringing immersion in ideal settings. Dinners and parties are given, becoming occasions for the expenditure of resources at a rate that is above one’s mundane self. Moments of festivity are attached to the acquisition of new possessions.”

“We are socialized to confirm our own hypotheses about our natures.”

“And isofar as natural expressions of gender are – in the sense here employed – natural and expressive, what they naturally express is the capacity and inclination of individuals to portray a version of themselves and their relationships at strategic moments – a working agreement to present each other with, and facilitate the other’s presentation of, gestural pictures of the claimed reality of their relationship and the claimed character of their human nature.”2 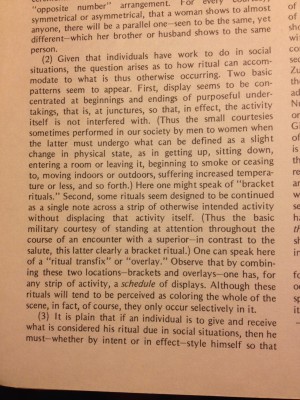 “OK now he was close, tried to domesticate you
But you’re an animal, baby, it’s in your nature”4

“Those (policewomen)who are there already have provided a devastating new weapon to the police crime-fighting arsenal, one that has helped women to get their men for centuries. It worked well for diminutive Patrolwoman Ina Sheperd after she collared a muscular shoplifter in Miami last December and discovered that there were no other cops – or even a telephone – around. Unable to summon help, she burst into tears. “If I don’t bring you in, i’ll lose my job,” she sobbed to her prisoner, who chivalrously accompanied her until a squad car could be found.”5

“It turns out then, that, in our society, whenever a male has dealings with a female or a subordinate male (especially a younger one), some mitigation of potential distance, coercion, and hostility is quite likely to be induced by application of the parent-child complex. Which implies that, ritually speaking, females are equivalent to subordinate males and both are equivalent to children.”

“In the principal European languages, typically a masculine form is the unmarked case; the feminine is managed with a suffix which, in addition, often carries a connotation of incompetence, facetiousness, and inexperience.”

“Any scene it appears can be defined as an occasion for the depiction of gender difference, and in any scene a resource can be found for effecting this display.”6