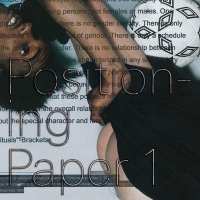 Driven by a desire for ‘self-actualization’[1]; I seek fulfilment, enlightenment and growth through my artistic practice. Employing the medium of collage, and inspired by life events and popular culture, I create aesthetically pleasing, yet introspectively monstrous collages that express, and allow insight into who I am, and where I am. Creating new narratives by juxtaposing familiar imagery with the unexpected and by adding text (often re-edited to pose questions or add humour), I address subjects such as ‘evolving and disintegrating roles of gender in contemporary society’, and ask such questions as ‘How does the representation of gender in art and mass media influence the lives of “civilians”[2]?’ I examine and expose the fragility and brutality of life alongside society’s fascination with ‘the beautiful people’[3].

Drawing on my collection of magazines, books, flyers and posters and my own photographs, drawings, textiles, films and writing, I produce retrospective portraits of popular culture. I rub away the paper from the collaged images leaving only the ink suspended in glue on the new surface, causing ruptures in the form and bringing an ethereal quality and an intimacy with the work. A laborious and delicate process; too much pressure may destroy an image saved for years, I enjoy the distress it brings to the image and the mystery of what will survive to the final outcome.

I have a BA Honours in Printed Textiles from Edinburgh College of Art and an MPhil in Motion Graphics from Glasgow School of Art. I am currently on the MFA Art, Society and Publics at Duncan of Jordanstone College of Art in Dundee.

[1] “Self-actualization” was first described by Kurt Goldstein inHuman Nature in the Light Of Psychopathology, Harvard University Press, 1940
[2] “I think for a civilian to go out with somebody in the public eye is a pretty awful proposition, to be quite honest”. Elizabeth Hurley on Larry King Live, October 20th, 2000
[3] “The Beautiful People” originally referred to the holiday party inclusive of President John F. Kennedy and Jaqueline Kennedy in Vogue, February 1964. Today it refers to fashionable, glamorous, wealthy and often well-publicised people.