I found this exhibition to be so inspiring, I was so struck by the similarities between my life and Hannah Höch’s, from her hairstyle in the opening picture of the exhibition to her starting point in the fashion industry to her debilitating illness and move to the country that I felt compelled make this film collage for my 2nd positioning paper. 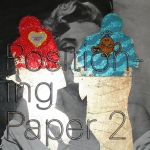 God made Adam and Steve.

Notes: Beyond holding up a fractured mirror to the sociopolitical changes around her, however, Hoch’s aesthetic also transcends history.

Whenever we want to force this open, “photo-matter” to yield new forms, we must be prepared for a journey of discovery, we must start without any preconceptions; most of all, we must be open to the beauties of fortuity. Here more than anywhere else, these beauties, wondering and extravagant, obligingly enrich our fantasy.

from “on today’s photomontage”

Hoch’s career was long and varied, spanning more than six decades between the 1910s and 1970s. Her work reflects the dramatic pace of change that new technologies brought about in tandem with social and cultural revolutions. She focuses on the changing role of women and the proliferation of photography through advertising and journalism.

The rebellious collages of Hannah Hoch

the artistic purple ports that the purpose of art is not to decorate or to replicate reality through naturalistic little flowers are still life renewed but to act as a document of the spirit and the changing values of a generation she began to cutup previously printed works pasting them into new compositions, soon moving on to incorporating mass media photography into these arrangements.

I would like to blur the firm borders that we human beings, cocksure as we are, are inclined to rector round everything that is accessible to us… I want to show that small can be large, and large small, it is just the standpoint from which we judge that changes… Space I would like to show the world today as Anand sees it and tomorrow as the moon sees it… I should like to help people to experience a richer world so that they may feel more kindly towards the world we know.

power of the collaged image stems from its potential for alienation.  Hoch’s overt distortion of proportion and grotesque compositional fit of her photographic material is expertly used for comic effect-the moment of alienation resolves itself in humour.

The complexity of Hoch’s collages, and the aesthetic unrest inherent in its workings, stewed in direct conflict to the politics of the coming decade. While Hoch’s collages embraced difference and used it as the compositional principle, the political realities in her native Germany where radically shifting towards the suppression of nonconformity. Returning to Germany in 1935 after a long, serious illness, the Berlin she found was very different to the one she had left six years earlier. (

(In the city) I was constantly being watched and announced by zealous or spiteful neighbours, so I decided, when I inherited enough money to buy a little house of my own, to look around for a place in a part of Berlin where nobody would know me by site albeit all aware of my eluded past as a Dadaist. Footnote 12

in her new home, Hoch “had managed to disappear completely as if I had gone underground”. Footnote 13